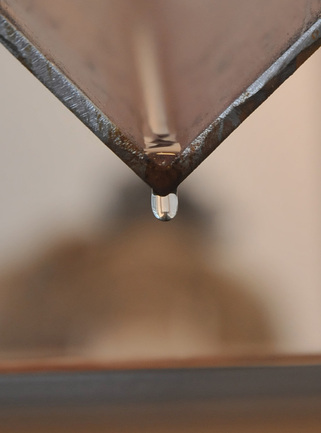 Following the population explosion and inevitable misery of cramped single-end housing, the Merchant City of Glasgow during wartime was filled with pawnshops and markets offering cheap goods. The warehouses and offices left empty by the merchants were reinvented for the war effort: iron fixtures were removed and melted down for munitions, and some spaces housed chickens and mushroom farms to keep the locals in fresh food. The landscape of present-day Glasgow often belies what has gone before. Today, the use of warehouses and offices has shifted again. New tenants are now resident, and are perhaps just as volatile. The spaces that once housed chickens now host exhibitions and artist studios.

Regarding this history, Uster constructed a kinetic sculpture, that nourishes grass seeds without utilising any soil, growing from the detritus collected from Glasgow, Merchant city, representing the layered history of the area. A counterweight mechanism is utilised for watering with a drip system. Whisky barrels, which are symbolic to Glasgow’s trade history  are used as the containers for ‘the nurtured’ and ‘nurturer’.