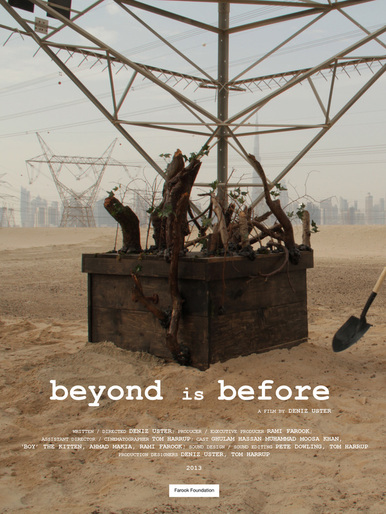 Beyond is Before was filmed in Nad Al Sheba-Dubai, envisioned in a post-apocalyptic future, whereby a freezing-cold Dubai from a concurrent past is excavated from beneath the sand: the story of a sole survivor traveling with his pet kitten. There is neither water nor oil in this future. Fortuitously, a spongy plant with a pink hue grows under the desert sand, whose fluid can be used both for liquid sustenance and fuel. A fish-plant can also be extracted from the sand as a food supply.

Relying on an unspoken language of acts and gestures, the film is not restricted by any specific lingual dialogue, so the narrative becomes as nomadic as the depicted subjects. A new folk religion has derived from the conditions in this future, where Islamic worshiping and its deity have merged with industrial iconography of the 21st century, such as the complex power grids that serve our cities.

Under the span of a pylon a wooden chest is discovered, capable of regressing any object placed within into its raw material, evoking a factory processing contrariwise. This process takes its inspiration from the film location of Nad Al Sheba, an area which used to be crowded with settlements, camel markets and traders, which then observed an urban displacement. Since it became the proposed garden space for Sheikh Muhammad it has now temporarily regressed into desert, an interim space whose construction has been suspended due to the economic depression. To this extent the chest is itself returning back into a tree with an underground root system and sprouting branches. Under a layer of grass and wealthy soil, a camel-bone rosary slowly transforms back into the camel, alloys separate into their component parts, cotton products into the fibre, plastics into crude oil... The protagonist must step inside the sacred internal ground of the pylon to claim these enigmatic beings - pre-objects.

This array of organisms proves transformative both literally and perceptively, coercing the nomad to plant a garden with the products of the chest. As he produces stones by regressing sand in the chest, the idea of borders and a rudimentary agriculture begins to grow, as a journey toward settled living. Despite this unexpectedly stable existence, illness and the distant memory of a past lived in better health tempts him back to the chest, whereby his bodily incarnation recedes toward the ultimate stuff of matter.