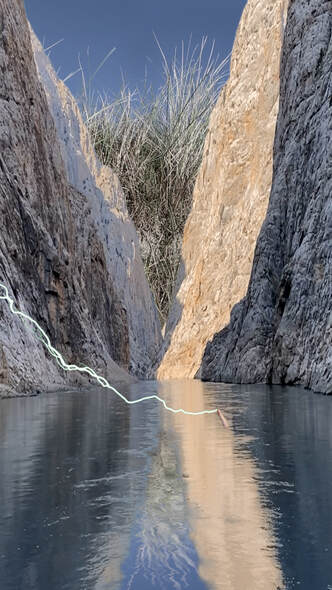 ​Humans have only relatively recently begun modifying the composition of the atmosphere and the energy balance of the planet that microorganisms have been performing on a global scale for billions of years. Bacteria which manage natural and human-induced release of carbon dioxide, methane and nitrous oxide, play an important role as both users and producers of greenhouse gases. However, apart from the symbiotic gut and skin bacteria willingly farmed on and within ourselves, humans have kept a certain distance from these agents, limiting their interactions with bacteria by large to the clinical environments of bio-remedial facilities. These ultra-capitalist, bio-techno-fixes support the fantasy that the Anthropos is capable of reversing the effects of climate catastrophe, while continuing the detrimental practices that have brought the situation to a head. Profit-driven biotech companies today are competing with each other to engineer bacteria that consume plastics more rapidly than others, that catalyse the formation of ice above zero degree Celsius to restore permafrost, or those that feast on greenhouse gases. What is missing in all these scenarios is the active featuring of humankind not as a distant exploiter but as a volitional host.

After all, humans share an archaic kinship with bacteria as borne out by the evolutionary theorist and biologist, Lynn Margulis’ theory of symbiogenesis. According to this theory—advanced, substantiated and scientifically evidenced in 1967—mitochondria in animal cells and plastids  in plant cells, and possibly other organelles of eukaryotic cells are descended from formerly free-living prokaryotes (bacteria), taken one inside the other through endosymbiosis. Now more than ever, as we scramble to check our greenhouse emissions or geoengineer our way out of the climate crisis, we could look back to our evolutionary ancestors. According to Margulis, “the becoming by living together” has not ended after the evolution of the organelles in eukaryotic cells and is as immense and profound as the expansion of our galaxy. The potential and possibilities offered by symbiogenesis are especially crucial from the vantage of bringing people closer to a Gaian way of thinking/living, and driving home the imperative that the change has to come from the collective within and not through constantly adapting, colonising, or imposing on the environment.

Departing from these evolutionary infections through which our predecessors were aggregated, Homo-Scylla speculates on these monstrous co-becomings, suggesting modifications to our understanding of the human. Through their shared a passion for microbiology, the spectacles of prehistory and anthropology and by observing the behaviour, social coordination and cooperation among bacteria, Burcu Yağcıoğlu and Deniz Uster present short science-fictional narratives in the form of five video collages. Each video depicts a narrative of symbiogenesis, set in different futures where humans and bacteria having metabolised each other, give rise to new organisms, biologically attuned to the altered environments of the Anthropocene. Each screen projects the future of five nascent bacteria-human symbiosis, offering glimpses of a plural embodiment.